This week at The Vue was a jam-packed week! On Thursday we had 5 move-ins and a bunch of tours! We were a little short-staffed as well because a couple of my coworkers were in Milwaukee helping to train some of the newest Weidner employees! My coworkers were at Weidner’s newest allocated properties in Milwaukee and were helping the new Weidner employees get used to the software program that the Weidner leasing office uses. We also through another resident event this week! We held a little root beer float and ice cream sundae party in our clubroom. Residents were able to make their own root beer floats and sundaes, and since it was hot out they all went and enjoyed the ice cream out by the pool. I also had an intern meeting in Milwaukee with the other interns and MIT’s in the Wisconsin region. We met with some of the Community Directors from the Wisconsin region as well as the Area Directors for Wisconsin. We were able to discuss some of the experiences we have had while working in property management as interns. We were also able to hear the stories of how each of the Community Directors and Area Directors got involved with Weidner and how they got to their current positions. After the meeting, we were able to tour the apartment complexes that Weidner recently added in the Milwaukee area. The apartment complexes are only a block apart and are blocks away from Fiserv Forum where the Milwaukee Bucks won the NBA Finals! The staff said that this week was a little chaotic with the Bucks game and the victory parade that followed a couple of days later. (The top photo is the rooftop balcony from one of the properties) (The other photo is a large second-floor courtyard area at the second property) 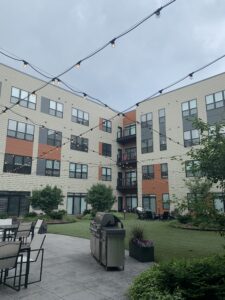 What is Cooperative Education?

A portion of your Real Estate Property Management coursework includes Cooperative Education. These intern positions apply your classroom knowledge in a professional work setting, where you’ll gain confidence in your skills and abilities. You’ll build a stronger resume with the work experience employers need and may have a position in place before graduating.