This week I am spending some time getting to know the competitors in the area. Swan Creek Apartments is located in a growing new development area of Fitchburg, Wisconsin. We have several competitors in our area in which I was able to secret shop. It is important to understand your competitors and what they have to offer for potential residents. I looked at studio and one bedroom apartments at Waldorf Astoria, the Addison, Elan, Riva, and Prima! All of the properties were beautiful as most are new developments.

Posted in From the Field Tagged with: Madison, Weidner, Wisconsin

First week at The Residence At The COR! 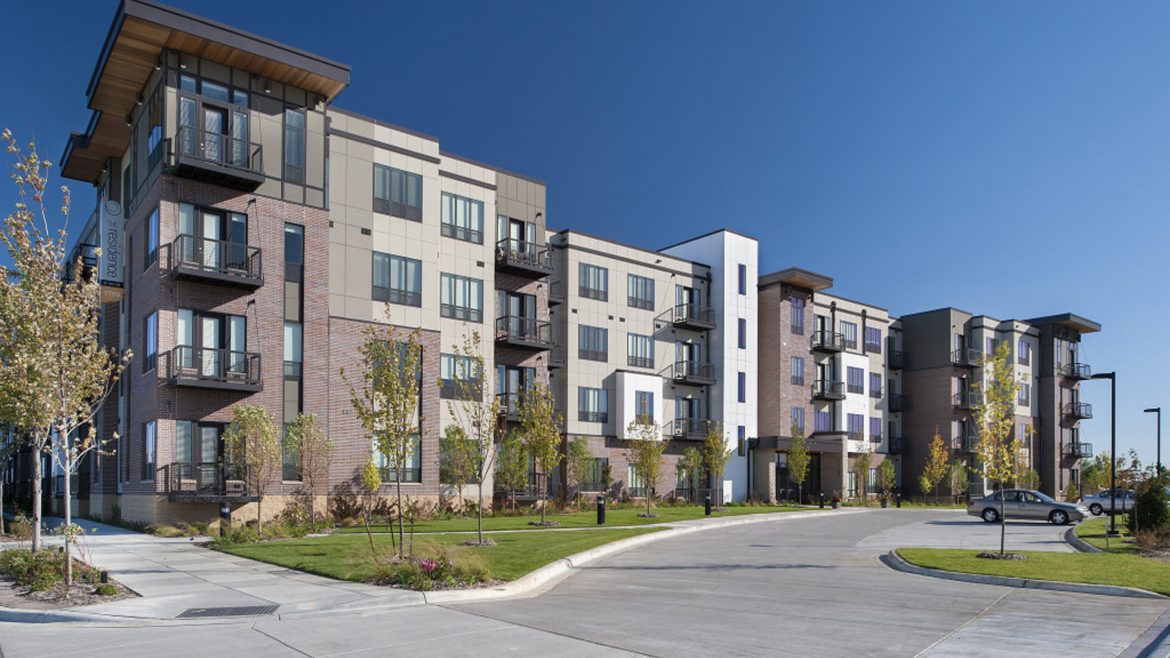 My first day started on June 3rd at the regional office in Minnetonka, Minnesota and I officially started at the site on the following day. Ever since, I have been kept very busy and have been learning all things about the property. My team has helped me every step of the way and I get to start giving tours next week! Excited to learn all I can this summer and see the textbooks come to life.

Posted in From the Field Tagged with: Minnesota, Weidner

You Just Got Shopped!

This was probably one of my most favorite days. The MIT and I went to other apartments (competitors) and we shopped them. We pretended to be cousins and I was going to school at Bethel University and he worked downtown in the cities. It was really cool getting to see what other apartment homes look like and how the other leasing consultants react and how they treat you. It was a pretty big eye opener for me.

Posted in From the Field Tagged with: Minneapolis, Weidner

Meetings on Meetings and Webinars! 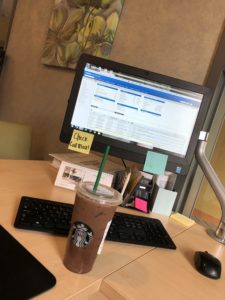 This week was full of meetings. It almost seems like we had a meeting or a webinar every day. It did help pass time throughout the day but it was one after another. I did however learn a lot from both the meetings and the webinars. It was totally a coffee after coffee kind of week as well. 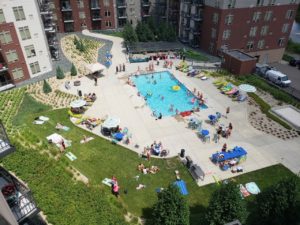 So far, this has been my most favorite and most fun resident event that we have done. We had a great outcome from this event and so many residents participated. We had a pig roast, DJ, resident dance off and prizes to give away. The DJ was awesome! we was dancing the whole time and singing trying to get residents to join him. It was a perfect day to do this event because the sun was out and it was not to hot and not to cold but the perfect temperature. We had may residents later that day email us saying thank for the event. In my opinion, if you have resident reaching on on their own that that means it was a  successful event.

Up, Down, and All Around! 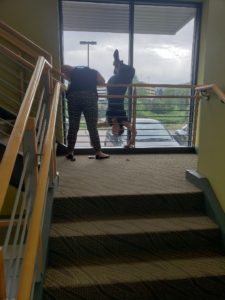 Being that I’m the young, athletic and flexible employee in the office today I had to squeeze between the window and railing and reach my arms down in between these metal support beams to try and find a key that was dropped. Unfortunately, it was not found. But, this is a good example of some of the random things that happen in a leasing office. We have a quite a few of the most random things that need to be done. This is just one of them that was captured in a picture. It for one thing, made my day interesting. 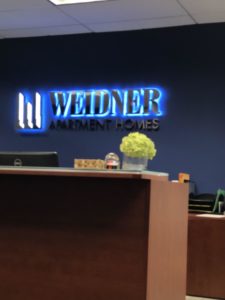 This week we had a large meeting and we earned about shops. It was really interesting getting to learn about these and how they all work. It was also a great experience getting to be around all the other Weidner Associates. I have not to meet many of them but there was lot there and all the things they had us do together was a great way to meet some of them and talk with them. It was amazing how so many of there are Stout graduates. 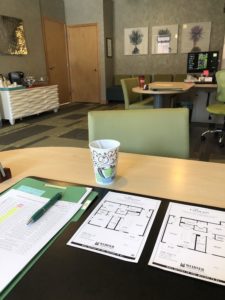 This week everything seemed to finally click! I knew what to do right away and not have to think about what I need to do or how to do it or where to find what i needed. Making folders, giving tours and sending leases, I was going through everything like i had been there for a while. A fresh cup of coffee, my morning cookie and I was ready to take on the day.

Zero Hour Escape, Can We Escape? 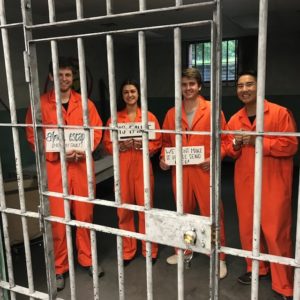 It Wasn’t Our Faults!

Going right into week two, we had a MIT and Intern meeting. Everyone else was already half way into their internships whereas I was only starting my first day of week two. We ended up going to an escape room which was a lot of fun doing with the people I just met. Later that week i continued with some more training in the office. But, things are starting to go more smooth and easy because I am picking it up better and doing it more. Excited for what week 3 holds.

Move in Day! Week One for Me! 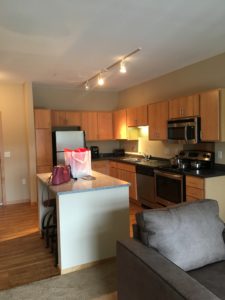 Moving in was full of excitement for me. I have never lived in a apartment community or in the city so everything here in so new to me. The first week was full of meeting everyone in the office and doing some training. I will have to say that warming up to everyone did not take that long, they are all very friendly and they do not let shy or  awkward last very long. Picking up on things is going pretty fast and easy. I am excited for what week 2 has for me. 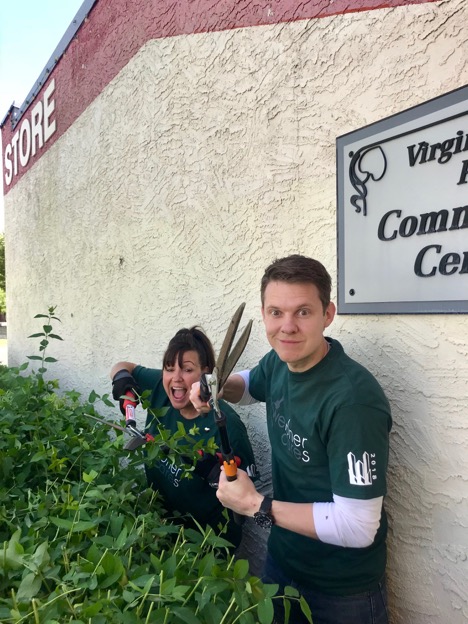 On my second day at Weidner I participated in an awesome event called Weidner Cares. Every year each Weidner region chooses a local charity or person in need and finds a way to create a positive impact. This year the Utah region chose to help a lady named Casey. Casey has been in the business of helping others for majority of her life and has helped start many crucial charities in the Salt Lake City area. Her current venture is running a thrift store named Cross Roads. The thriving store sits on a run-down neighborhood in Salt Lake City. Although Cross Roads has been up and running for the past 27 years, it has received little help in that time and looked nearly the same as it did in 1991.

The business survives mainly off donations that come in daily, and have many customers that rely on the store for survival. Their target customers are those in a low income bracket that are struggling to stay afloat. Although there is a lot of business that comes through the doors, I was surprised by the pricing system that the store goes by. When you buy one item at the shop, you get 9 items free. This shocked me and raised a bunch of question in my head, the most prominent being: How does the shop stay open? -It is very evident that Casey runs this store out of the goodness of her heart and not for profit.

When we walked into the shop it was filled floor to ceiling with clothes, dishes, pillows and blankets. All items that are crucial to survive, but it was obvious that there was not enough help for the amount of work and organization that needed to be done.

The Utah team came together to completely gut the shop and renovate it. We cleaned the entire store, put a fresh coat of paint of the exterior, painted the walls and rebuilt what was broken. The following day some more volunteers came back to scrub the floors and put all the merchandise back in the store.

The project as a whole was extremely eye opening. In eight hours, the Utah team was able to forever change Casey’s life and transform her business. Although it was already a popular destination to shop in the neighborhood, it is now a much cleaner more organized version of itself. I hope that this small act of kindness will make Casey’s life easier and positively impact those who shop there. It was a lot of work, but a great way to be welcomed to Utah!

Posted in From the Field Tagged with: Utah, Weidner, Weidner Cares

Recent Posts in this Section

What is Cooperative Education?

A portion of your Real Estate Property Management coursework includes Cooperative Education. These intern positions apply your classroom knowledge in a professional work setting, where you’ll gain confidence in your skills and abilities. You’ll build a stronger resume with the work experience employers need and may have a position in place before graduating.